This style was created and developed by lifetime practitioner Sijo J.R.Dutton. Sijo began studying Fu Jow Pai in his early life and studied many different martial arts before he thought of combining them into a new style: Hung Leng Kuen. He was a qualified Sifu in Fu Jow Pai, Tong Long, Tai Chi and Hut Pao.

The following was written by Sijo Dutton in 2008 as his account of how the Hung Leng Kuen came to be. 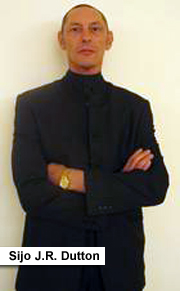 In 1970 I was fifteen years of age and living in the not so sunny climes of Rochdale, Lancashire, when I met a man who would change my life forever. His name was Sifu (Teacher / Father) John Rostron. For many years he had studied several Martial Arts including Shotokan Karate, White Cloud Kung Fu, Tai Chi Chuan, Feng Sao (Hand of Wind) Kung Fu, Fu Jow Pai (Tiger Claw System) Kung Fu and Ju Jitsu. He decided to incorporate the various aspects of these arts into his own system, which he named Fa Tsu Mao (Method of the Cat), which later became Hut Pao Tsut (Black Leopard System) Kung Fu. He preferred to teach only private students or classes of up to four. He was a total disciplinarian and approached all aspects of training with a stern, unforgiving attitude. As an example, I have scars on my chin and on my tongue where I nearly bit through it, after asking what use a wrist fist was. Stance work was the main syllabus in the early training sessions along with constant drilling of various blocks, parries, punches, strikes and kicks. Rolls and break falls were introduced along with throws, locks and chokes much later (mats never were). Body conditioning was essential if you were to survive the often-brutal sessions. Hand and foot blows were landed hard enough to knock you off your feet. If you were unlucky enough to walk into one of his techniques (and I was on many an occasion) and the air was knocked out of you, you would be made to continue. If you could not, when you recovered you were made to perform sit-ups in time to his incoming punches to your stomach, often in sets of fifty repetitions. Being knocked senseless was a continual occurrence. Flexibility training was no less severe. Training aids to help you consisted of your open legs dragged apart whilst performing the front or side splits and having your chest pushed to the floor; with your feet touching, standing on the inside of your knees in order to make them touch the floor; or, while stood against a wall, having your foot pushed to touch the wall next to your head and holding it there for several minutes. 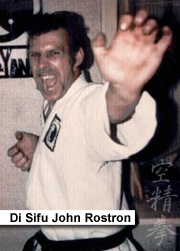 From time to time Sifu would open a club in the town. At that time there were only Shotokan Karate, Judo, Shorinji Kempo/Ju-Jitsu clubs and a Boxing club. Our first school opened in a Mormon Church hall. Sifu Rostron ran it along with Sifu Roy Langstead, a Feng Sao practitioner for about a year but the fall out rate led to its closure along with a difference of opinion on how the classes should be taught between the two instructors. Sifu Rostron’s opinion of those that left that could not maintain the training was that they were not worth teaching due to their lack of commitment and would, no doubt, never achieve anything in life. He believed that one should never allow any aspect of private life to interfere with training. Be that home, work, family or, in most instances, illness or injury. If you had a broken wrist (and, at one point, I had) you were made to work upon the other hand and kicking. He had no time for excuses of any kind - you were totally devoted or you were history. Our second club was run in a scouts hut. The floor was concrete with a smooth coating that became lethal when it was wet, (which it did from our sweat running from us as we trained in bare feet). Heating was non-existent and it was freezing in the winter months. Toes got broken and you wouldn’t know it until you got home. A year later we moved into the offices above the Liberal Party’s headquarters though after a year once again dwindling numbers caused its closure. This was also the time that the early Kung Fu movies came out and everyone wanted to be Bruce Lee. That is until they realised the hard work and devotion needed to even start to master any Martial Art. Sifu was not alone in his severity of teaching that was the way it was taught in the 1970’s. Early Karate and Ju-Jitsu clubs have their own horror stories about their teachers and of course that was the way that they themselves had been taught. Apart from these classes Sifu only ever taught by private tuition. This was the mainstay of my training for the next six years until I left Rochdale in the late 1970’s as a third black sash and travelled to the South. I owe every thing that I am to Sifu Rostron and although I was to meet other teachers later and combine their Arts with mine, they could not compare to Sifu Rostron. He had replaced the father and brother that were never there for me as a child. He taught me respect, discipline, courtesy, self-belief, focus and values that will stay with me for the rest of my life. Sadly, he passed away in 2001 and will be greatly missed by my students and myself. 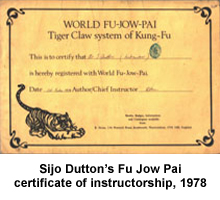 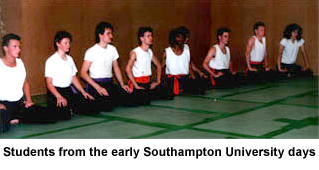 I lived in the Shirley district of Southampton for about a year. While I was there I taught a football player named Colin White. We trained outside in all weathers, anywhere we could find (a school playground mostly) and occasionally in his mothers flat. He was very committed to training but eventually had to stop to further his football career. Another thing that happened was that I met Theresa, who became my second wife (I met her in a pub called The Rising Sun and have never been back since). Theresa lived in Chandler's Ford, just outside Southampton. It was there that I opened a club at the Ritchie Memorial Hall and ran it for six years, during which time I met several outstanding Martial Artists. The first of these was Sensei Mike Gray, a fifth degree black belt in Judo and third degree in Ju-Jitsu (he had also studied Wado Ryu Karate). He went on to study Taekwondo (Korean Martial art meaning Fist Foot Way) Doce Pares Escrima (Philippines stick-fighting art) and is at present the Southern representative for Jeet Kune Do (Way of the Intercepting Fist). Mike and I trained together over six years, as did our students, performed several demonstrations for the public and taught together at yearly training camps in Cornwall along with Sifu D. Green (Jun Fan / Jeet Kune-Do) and Sensei C. Wedderburn (Ju Jitsu), giving seminars (training workshops where students try out different arts and training methods). I have always held a great respect for Mike as a teacher of the Martial Arts and have valued his friendship and that of his family. The second was Sifu Simon Chesney. He taught the Phong Guan, Cong Chang (Phoenix Eye Fist and Sun Palm) system of Kung Fu at the Athletic Union Southampton University. Simon and I ran a series of Ladies' self defence courses at the campuses and hospitals around Southampton. Simon and many of his students changed to my style of Kung Fu which I had renamed Hung Leng Kuen (Free Spirit Fist) as it was no longer pure Fu Jow Pai (Tiger Claw system) nor pure Hut Pao Tsut (Black Leopard System). When Simon left in the mid 1980's, I took over as Sifu at the University as well as still running the classes in Chandler's Ford. At this time some of the university students were training at all my classes, seven times a week. 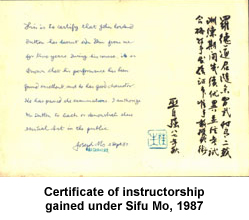 It was in Chandler's Ford that I met an extremely knowledgeable man called Joseph Mo. Joseph, a Cantonese Chinese acupuncturist ran a clinic at his home. One day, by chance, I knocked on his door to ask if he would mind advertising my classes by putting up a poster for me. He asked if he could first come and watch my classes to which I agreed. At this time I was not aware that Joseph Mo was a highly respected Sifu of various Kung Fu styles within the Chinese community of Southampton. He was highly impressed with what he saw and kept expressing "real Kung Fu, this is real Kung Fu". Sifu Mo, like many other Chinese people at the time, did not believe that English people could practice Kung Fu as well as the Chinese. He invited my students and I to train with him at the Chinese Community Centre in Southampton. I also trained privately with him and his Pak Mai students at his home. Under Sifu Mo I studied the following systems of Kung Fu: Tong Long (Praying Mantis) Pak Mei (White Eyebrow) Ba Gua Chang (Eight Trigram Palm) Yang Family Tai Chi Chuan Application Choy Lee Fut / Chang Chuan combinations (Choy Family, Lee Family, Buddha fist / Long Fist) I also learned weaponry drills: Dao (Chinese Sabre) Gim (Double Edged Sword) San Gee Kwan (Three Sectioned Staff) Kwan Do (Halberd) Kwan (Staff) Learning these forms enhanced the art of Hung Leng Kuen immensely. Up until this point the style had been quite external. The internal influences of Tai Chi Chuan and Ba Gwa Chang, along with the different individual characters of the animals themselves, turned our forms into beautiful routines with deadly application. 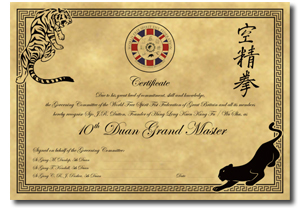 In 1987, whilst still training with Sifu Mo I was looking to become part of a reputable governing body for licensing purposes. This I found by joining UKASKA (The United Kingdom All Styles Kung Fu Association). Sensei Roy Stanhope, a sixth degree black belt in Karate, and Sifu Phil Mead, a fifth degree black sash kung fu practitioner, founded UKASKA. I became the Southern representative for this association at this time and introduced Sifu Mo and Sifu Greg Fernandez to its membership. I was also a judge at the National Championship held in Stockport alongside both Roy and Phil, for both Form and Combat Competitions. My then three clubs, Southampton University, Chandler's Ford and Fareham were all registered through UKASKA until I reluctantly left because of business problems brought on by my divorce. I was also forced to close the Chandler's Ford and Fareham clubs but continued to teach at the University where I still teach today. In 2003 I was honoured to accept a Fellowship of The Athletic Union of Southampton University for my services to the Students Union. In 2004, The Free Spirit Fist Federation of Great Britain was officially established and in 2008, a governing committee was appointed, consisting of myself and the three most senior instructors - Si Gung Myles Dunlop, Si Gung Tim Kendall and Si Gung Chris Parker. You can find out more about the Federation on this page. In June 2009 I was recognised by the committee as 10th Duan Grand Master of Hung Leng Kuen. Since 1974, Hung Leng Kuen Kung Fu has grown and developed. I have produced many competent Instructors in the subsequent years, some of which have moved abroad and some have chosen to establish other branches of Hung Leng Kuen in their home towns (to find out more about them, visit the individual club links from the navigation panel). Combining our efforts, and those of future students and instructors, our family will continue to grow.